It was a brutally early start to the weekend, but this is the way the Indian and Pakistani Cricketers of Chengdu like to role. Needless to say, I didn’t volunteer to umpire the first match of the day which kicked off at 7.30am. Gotta love ’em.

The bad news was, thanks to a game of ‘u.mao.cho’ (Badminton) with Hong Kong Harry on the Friday evening I had a horrible calf injury. It felt like more than cramp, but less than a pulled muscle. Anyway, I limped about the field and was largely useless throughout our two matches of the tournament.

Shanghai may have grass pitches, but the enthusiasm from the Indian and Pakistani teams was just contagious, and playing on worn astro was not such a bind. I think a lot of the players study medicine here, and some may work in a Pakistani Aeronautical Complex which I believe is based somewhere in the basin.

Above is some footage of the one and only William Mwangi from Kenya being castled. It’s true, his stance needs some pretty major reconstrucutive surgery but we’ll leave that for another day. For the moment he is quite happy taking things in his own time on the 18th.

Our star player, Southern Indian Sun was keen to get the team practicing throughout the day, and here they are catching with soft hands.

Amir, the tournament organiser, was very happy with the way things turned out and posted his gratitude on the old wechat. 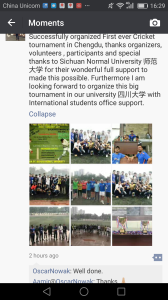 A great day was had by all : Jack, Alan, Sun, Matthew, George, Stuart and me (and William Mwangi who didn’t make the Sichuan lunch!)

…and another with Tiger Woods and Amir the Organiser. 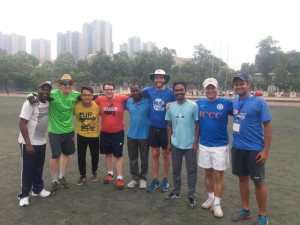