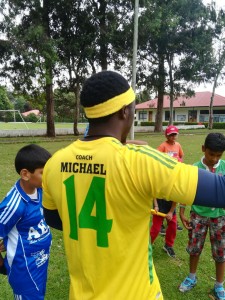 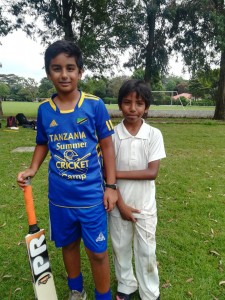 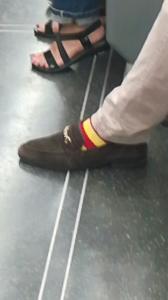 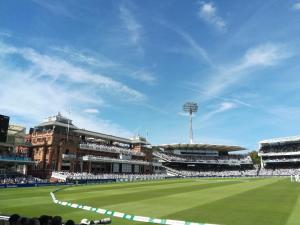 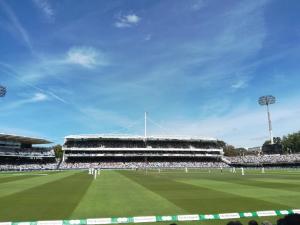 The sun rose uncontested into a fine blue sky and I made my way up the Bakerloo line to HQ. Ten years in the pipeline, and some twenty still to go, but who’s counting? I carefully read the website instructions as to exactly what could and could not be worn, and on a day when temperatures soared, I was thankful to be wearing tailored shorts.

With an iced coffee in hand, I parked myself up and no sooner had I taken in the immediate surrounds than I spied a fellow it warmed my heart to see. We sat out the England innings, and against current form Root posted a super ton, with Willey Jnr slamming a rapid 50 at the end. 320 was a fighting total, especially after no shows from the big guns such as Buttler and Stokes. 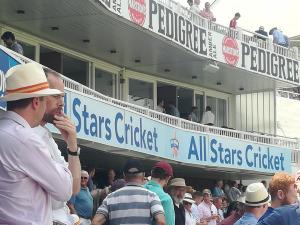 A man a plan a canal Panama (my all time favorite palindrome).

Sitting together through the India innings was a joy, as the tourists just kept getting snuffed out. Dohni should have led the charge earlier, but then by the time his partners were down to Kuldeep, perhaps he must have felt a responsibility to just stick around.

A truly splendid day. 1-1 in the ODI series. All to play for at Headingely tomorrow.

Met up with ex-work colleagues to go to a 20/20 bash at Lords. It was a fun evening. A London Derby of sorts. Middlesex v Surrey. It was a pleasant, well supported event. Morne Morkel put down a catch just infront of us under the media centre and perhaps had he taken it, and Cartwright had been sent back to the pavilion things might have been different, but as it was, Middlesex went on to win by three wickets.

England went to Bristol to play the deciding T20 in the sweltering heat. Root was dropped to make way for Stokes, but 198 didn’t prove to be enough, and India knocked them off with ease. Rohit managed to post an unbeaten round 100*. The T20 World Cup in Australia in 2020 has a nice ring to it. Meanwhile, the old country is in the grip of a wonderful heatwave and Football World Cup fever. It can’t really happen can it?

What a joy to listen to Rashid and Buttler hold the fort on Sunday afternoon. On a day when England spanked Panama in the World Cup to the tune of a tennis match score, 6-1, the England cricket team performed wonders up at Old Trafford, under a cloudless sky.

Utterly fantastic. Bring on the 20-20 today.

Also interesting to read of a match between Peterborough and High Wycombe over the weekend where the hosts took 7 wickets in 11 balls to win by 1 run.

At 4-0 up in the 5 match ODI series against the Aussies, it feels good. To score 480 odd the other day at Trent Bridge was record breaking. What a performance. I’ve watched the highlights twice and could watch them again and again. Just hope we can transfer this kind of play to the World Cup stage. It is high time we won the tournament.

Lost some crucial wickets at the wrong times, but chased down 214 in South London yesterday. Funny seeing Broad and Anderson in the various commentary boxes, and an era definitely feels as if it is coming to an end.

It’s funny how cricket stays in the family. What with Willey hitting the winning run yesterday (in fine style – a six straight back over the bowlers head), it made me think of how his father used to have such a unique stance. 1-0 up, with 4 to play.

It just goes to show. If you are skittled on the first day for under two hundred, odds are, the contest will be one-sided. Pleased the team have finally won a test match.

The excruciating thing about Test Cricket is that there always seems to be a glimmer of hope. It’s like a novel, it’s like love, it’s like anything that is worth putting time and effort into. But the problem, is that with all that optimism can comes the dreaded come down.

On Saturday night, I watched (on TV) Buttler and Bess pull England back into a position where there was just that glimmer. We’d fallen apart on the first day. 184 all out. You rarely win test matches from that position. But with those two taking us into Day 4 on 66 and 55 not out, I just thought perhaps we can give our bowlers something to bowl at.

It was not to be. We were torn to pieces within the first hour of Sunday’s play. The first time we have lost in May since 1921. Agnew blames the football warm-ups, there may be something in that, but it’s a mind-set.